Giving a break to my sabbatical from the blogger meets, I decided to hop on to this one..Why? Well..no..it wasn’t the free food or drinks! The truth is, I was missing the meets- the craziness, the exploding enthusiasm, the head banging and the hudd hudd hudd… Meeting my dearest friend, Garima who blogs at Penumbra and Naina with her mesmerizing insights on life and likewise..who blogs at  WhileMyCoffeeBrews in particular and incidental meetings with blogger friends, Shwetabh, Gaurav, Ankita, Shivani, Kajal Kapur ( met her for the first time and her lovely daughter, Dhanak and cute but shy hubby who was almost speechless as we shamelessly asked him to click pictures of us together!) .
The fun thing about such blogger-meets apart from meeting the crazy hosts Nihal, Karthik, Anoop, Vineet and Revin and the Indi team but also meeting other bloggers ranging from 12 yrs old to 65-70yrs old.

It is amazing to see everyone blend into this homogenous cluster of togetherness, yet if you have the eye, the indivual-ness of each would strike you at every nook and corner. It is probably this vacation I had from the Indimeets that when I finally went ahead and attended this one that I realized what fun I’ve had in them!

Every Indimeet has a theme and agenda to it which makes it a business friendly proposition and an excellent arena for social-marketing and customer reach programs. And what better theme than to have the #JiFi experience conducted by Kotak Mahindra Bank, who have launched their newest initiative called JiFi which pledges that BANKING IS NOWSOCIAL. 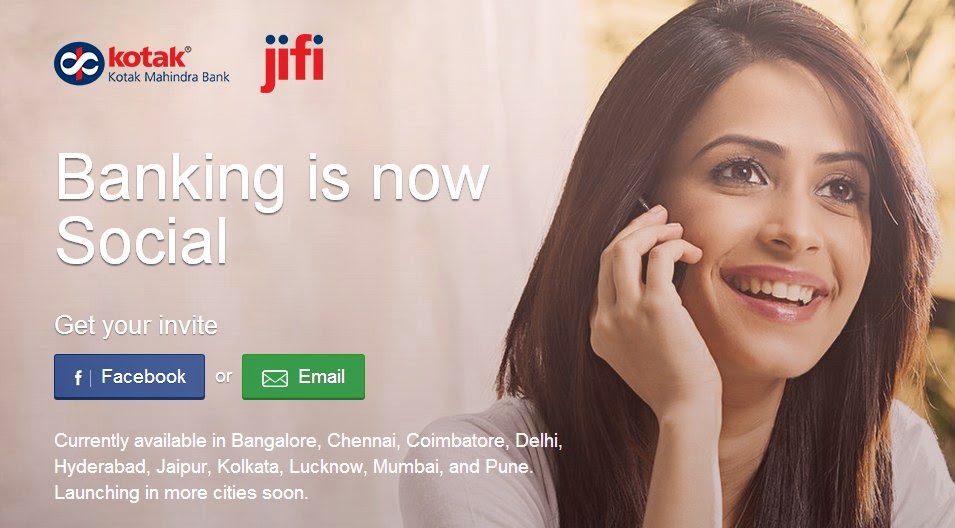 As the theme suggests, it is about taking the banking process to the most popular medium of expression- social media websites like Facebook, Twitter where there is a possibility of direct communication and ease of transaction between the bank and its customers. It is absolutely secure and is safe even for amateurs who may not know much about technologies associated to it. 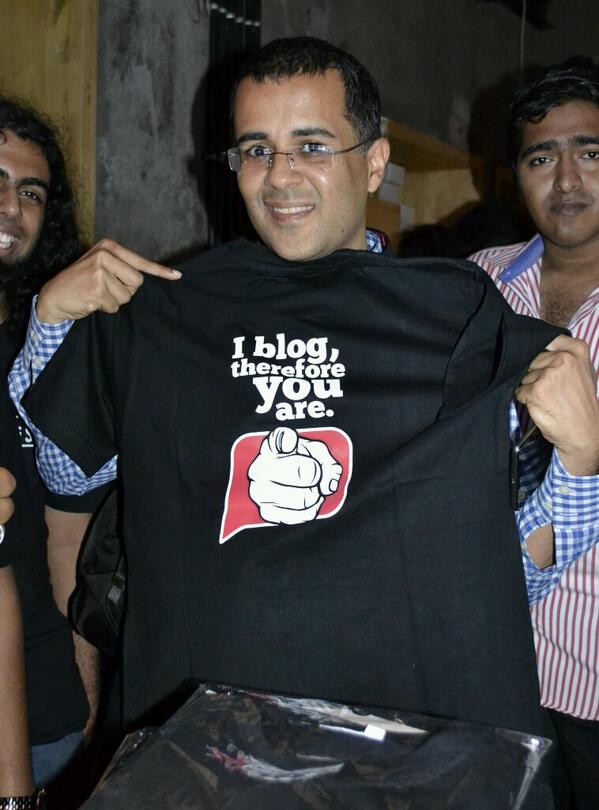 Who better to explain the process than to have CHETAN BHAGAT, who is famous as one of the most popular authors of India but who was also in the banking profession before he chose pen and paper over money. What was fascinating about this meet was that there were simultaneous meets going on in Mumbai and Bangalore along with Delhi. Chetan was attending the Mumbai meet. However, through the awesome technological prowess, we saw the live event happen and we could also send in our questions to him via Twitter with the hashtag #JiFiIsHere and also join the Google Hangout with them! 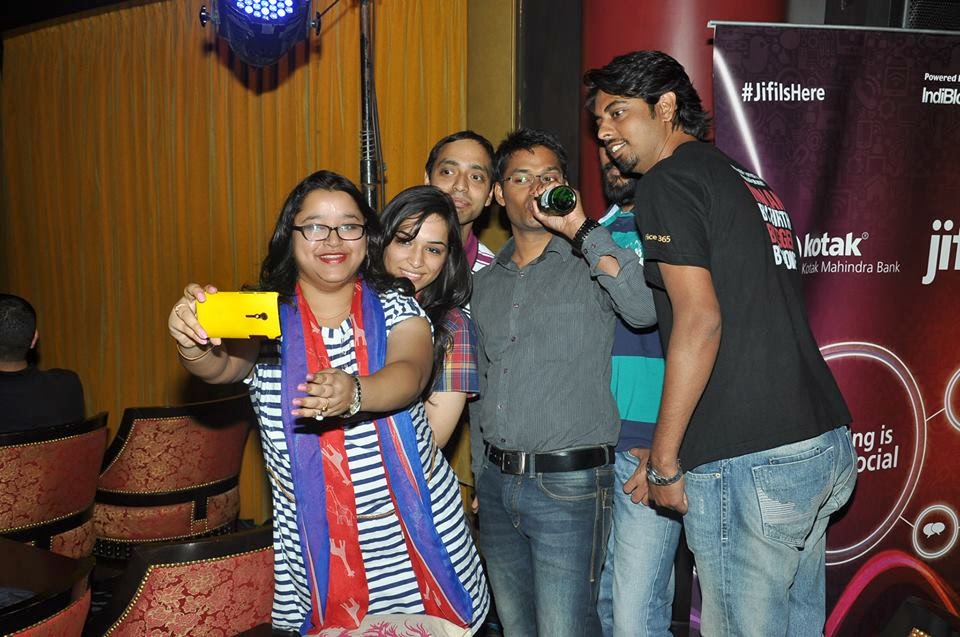 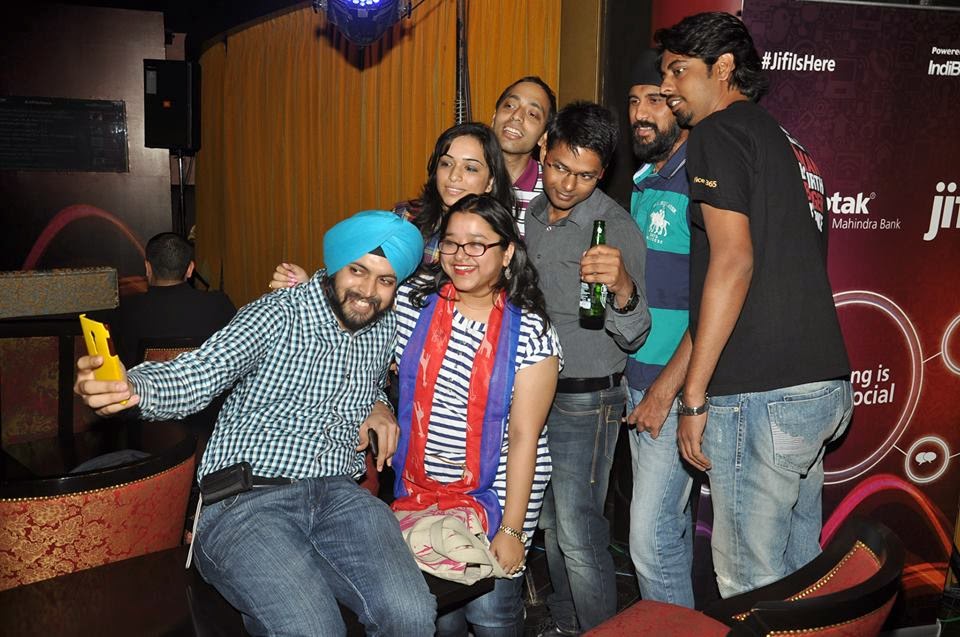 The meet started off with Nihal announcing the Selfie contest! And did we go mad! Flashes went crazy and it was indeed amusing to see people scuttling from one group to another, making poses and screaming along, even for clicking pictures! Interestingly, we were clicking a selfie when the contest was announced and I managed to upload the first selfie- and guess what! I won the contest! Wuhuuu! All thanks to the cool group of people I met who were sitting in the rows in front and behind mine! 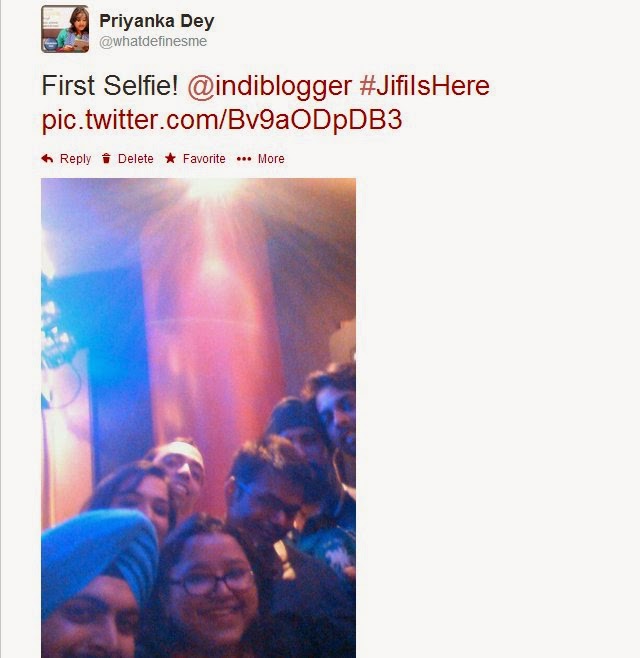 What followed in between the live event interaction and lunch was the sight of people gargling with laughter –either because of the drinks or the Nihal-jokes! He is a crazy nut and Loves head banging! But the poor fella hardly got a chance to eat with the loooong queue at the food counter during the lunch break. But then I am an expert at handling the queues and thus, was more than happy to share the pile of food I’d managed to sneak in my plate! Too bad I couldn’t click a picture of it!
There was another interesting activityà the Kotak Premier League (KPL) wherein we were to divide ourselves into groups of 6 and then the groups from the three event venues would have to tweet it out between ourselves. But we, the #KPL4 Team were creative-enthusiasts who decided to take this a step further and asked for the bar tender to make us some shots for a team pic @B-Bar! And lo behold, the guy agreed, but he had a condition. He’d make the shots  Maria, With Love (named after his girlfriend!) and we’d have to tag the name too.. How sweet! Right? 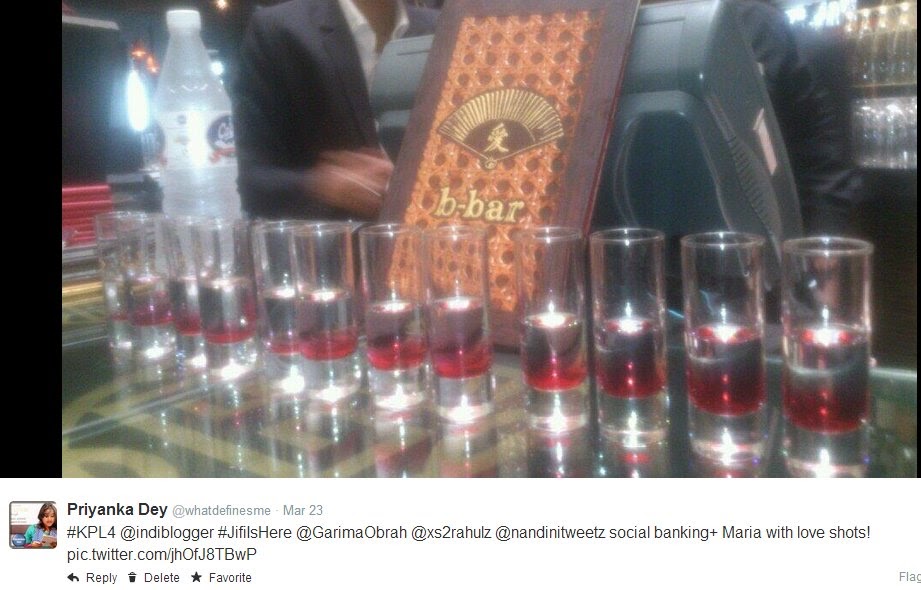 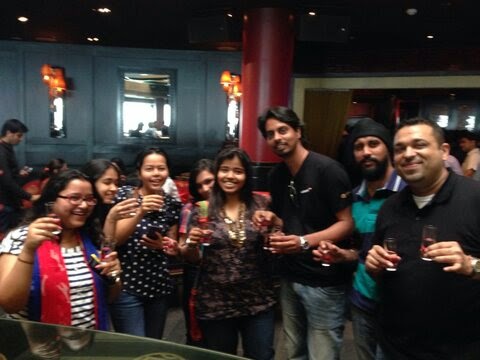 I think I had a stench of craziness when I had seen the board outside the mall named B-Bar and had led my auto there only to realize that it was the Parking! Four floors above with the help of the escalators and a lift ride thereafter (yeah, the Mall does not allow lifts for the other floors; just for the B-Bar), I knew I was headed for some craziness! And what can I say, it was

Friends, Food and Fun= Innuendo raise to the power ‘n’! 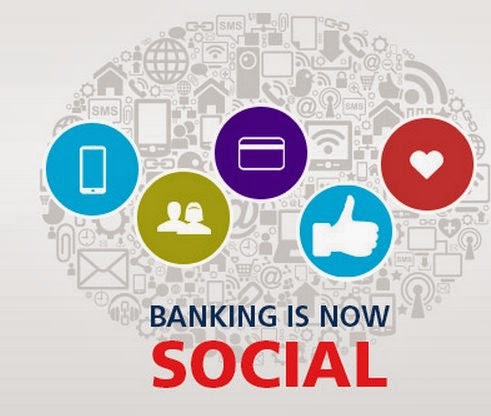 We Are Reborn- Day After Day

Isn't it amazing how new things remind you of the old things, the old days gone by and how life has gone past all these years, and you forgot to realise how time simply flies!

However, there are these relations, people, possessions
we hold on to so close that
we don't realise that what is left of them
is only a shadow- lifeless and color sucked out of it as if in haste.
My purpose of writing this post?
It is catharsis as some people would put it- it is
to spit out the venom out of your system, for good.
A dear friend, that long lost-now found book or that tea-stall
you'd almost forgotten of, but did not erase from your memory.
How a small talk or indirect references, made it all come back
with a salty realization that you might not be a speck of what they worry of anymore?
It takes a lot of courage to move past that mark,
To head off to a new start. But you know it is worth it!
Opportunity knocks you off the ground, that’s the door you gotta open
It isn’t as picturesque as it seems.

We live a lifetime wondering if someday
We’ll attain the closure we deserve.
And yet, at some point we do end up knowing
It was a milestone that left us, while we were busy searching.
Such closures are about us, our emotions and our way forward
Such paths have no beginning and no end.
There is no after life, only re-births.
If it at all has to be about a farewell,
Then fare them well, and grasp with both hands tight
Not them, but the memories you shared, equally.
It is about having that bad headache, which has no other solution but
A nice hot shower, with your favorite body wash.
The difference can range from a ‘good bye!’ to a ‘good riddance!’
That is how life helps us deal with what may not go
But evaporate afar.
It is all about making the choice, to either hold your own horses

Thank you for the prompt Racold & Indiblogger 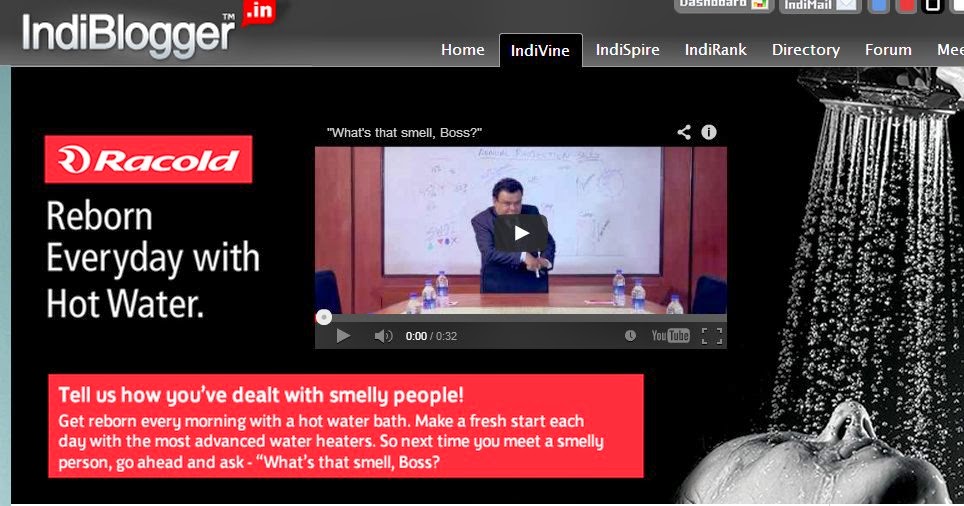