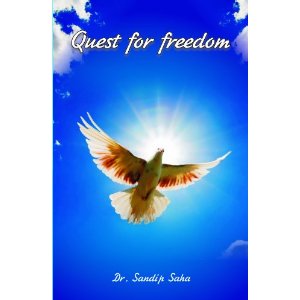 Poetry is said to be a sign of progress; a sense of belongingness is said to have been achieved through poetry- something that is seldom achieved through any other mediums. The title of the book, Quest For Freedom, is in itself a self-explanatory expression for the wings that poetry instills onto oneself. As one scrolls through the pages of the book, the message of it gets sharper and clearer- Bring Freedom onto Expression. You must be wondering, freedom into expression-isn’t expressing all about freedom? Well technically yes, but then thanks to the art of flattery or that of getting our “15 seconds of fame” we tend to get biased, unruly and almost unethical. In contrast to this, Dr.Saha manages to skin out a structure of poems that call a spade: a spade.

The collection of poems surround around various themes that Dr.Saha has beautifully structured, making it look neat and composed unlike many others that seem random and out of structure. These themes are, namely Eluding Justice- that deals with the concept of a nation- our nation, India, peoples living in and around and furthermore, their characteristics in terms of their traits, their virtues and vices and concepts of patience, endurance and hypocrisy and an extremely significant attributes that have shaped our nation such as slavery and freedom. Further, he talks of the second theme of Life and Death where he questions concepts of what is Life and then what is Death- what are their consequences and effects, what happens after death happens and also what role destiny plays in the two scenarios. The third theme talks of a concept too much spoken of- Love. Love not like the ones our novels talk of but the kind of love this book talks of is tranquil and almost hypnotic with a reverence to love as God’s gift to us. He further explores love for parents, siblings, children and partners. The forth deals with a phrase- Longing for realization- which explores into dreams, success, fantasies, visions and their contradictions with destiny, fiction, failure and intrigue. The poems within this facet are my personal favorite from the entire lot with complexities of spirituality, dreams and realities are very eloquently tackled. The last but certainly the best theme is Enlightenment, a topic that intrigues me to no ends. It deals with illusions of the mind, one’s existence and purpose-his deeds, Salvation and his relation with Knowledge and also his past, present and future. 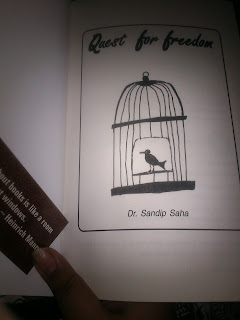 All in all, it is a book that encompasses themes that our humanly existence revolves around and the language, tone and simplicity with which Dr.Saha has dealt with the themes, moves the poet in me. The only thing that I felt is missing, was the usual foreword and the acknowledgements sections. I am one of those crazy readers who actually read “from cover to cover” and thus, I found it quite surprising when I found that absent. However, I also would add that these are trivial matters that rests solely upon an author to either pursue or not. Though the Quest for Freedom seems to find its shape, the quench for it still continues to seethe. Hopefully, the freedom shall dawn soon. Also, I felt that the language could be nuanced further, which would bring out the beauty of the poems even more.