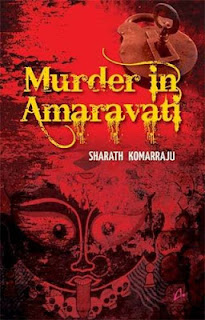 It has been a considerable hiatus from book reviewing for me- Pre-Exam Stress, Post Exam Stress and then House Renovation stress. So amidst all the transitions in my life (and I am being overtly dramatic about this one!) I was mailed by Blogadda that I was one of the chosen bloggers to review this book titled, Murder in Amravati, written by Sharath Komarraju. What fascinated me the most was it's cover design, and being a slightly aligned feminist, the idea of opening a closet of murder mystery and suspense of a woman who was the village hostess (who in today's lingo would be the prostitute).

The setting of the plot is in a typical village with a sarpanch, a priest, a postman and some others with their respective families living peacefully in a neatly hierarchized order which no one in the village dishonoured. But trouble arrived in its chariot, shaking the volatile stability of this village of Amravati when Padmavati is found within closed doors of the temple at the idol's feet, lifeless. An autopsy identifies drowning to be the cause of death while the village-men speculate and brush it off as an act of suicide by Padmavati to get rid off her sins. The mystery thickens as it is revealed to the police constable, Venkat Reddy who had gone to record the case, that the only keys to the closed room were with the priest, Krishna Shastri. Other characters join in the bandwagon of suspects as Reddy determines to dig the case further instead of agreeing to the villagers plea to let the case be as a suicide.


Seetaraamaiah(The Sarpanch), Satyam(postmaster), Lakshmi(Satyam's wife), Shekhar(half-paralysed), Vaishnavi(Shekhar's wife), Kishore(Sarpanch's son) and Indira(Sarpanch's daughter who is fully paralysed) are some of the characters who seem to be the multi-focal points to the murder that Reddy begins to investigate each of them and corresponding their statements across to reach conclusions about what actually happened to Padmavati. How did she die of drowning? If she had died, then how did the body come inside the temple? If it was a murder, who killed her?It is amazing to see that there are first-time authors who come up with such impressive story-telling skills and it is so readable that I could not turn my attention away from it, despite all the chaos I had in my house during the renovation-the book simply hooked me on to it as the story unravelled itself. It has all the masala- suspense, easy language and readability and narration to make it a national best-seller. In a market, where every author thinks of himself/herself as a best-selling one, this guy truly has reasons to celebrate.


A different concept, and interesting commentary with the polarities of the characters gives a different edge to this book. However I must add that the promotions for this book seems to be insufficient. Not many people know about the book which clearly shows a lack of interest and knowledge in both the author's and the publisher's case. Such inadequacy of promotion and marketing leads to the losing out of the audience in the book market which has now threateningly become more of a flea market. Also another point that seemed iffy was that it is priced at a very high price of Rs..250 which in comparison to the other books floating in the market, is too costly. This might again prove to be unprofitable for the book.Nonetheless, I liked the book as a whole and thus, proudly give it a 4.5 out of 5.

This review is brought to you by Blogadda .

The author can be contacted here: www.sharathkomarraju.com

The Facebook Page: https://www.facebook.com/AmaravatiNovel
You can buy the book here:

Posted by PRIYANKA DEY at Thursday, May 31, 2012
Email ThisBlogThis!Share to TwitterShare to FacebookShare to Pinterest